Note: Sorry, my internet connection is super slow plus my video viewer is messed up. I am uploading the post and continue editing it.

Last leg of David radio interview galore before a short drought and then the Album Day and TV promotion feast!!!!! He is now back in LA for band practice. I am so looking forward for CRUSH with a live band! Why? Because of this……

Breaking news out of LA!  As you know, David Archuleta is rehearsing with his new band this week.  FOD has just received word that the band sounds unbelievable and David is stoked!  They just started going through songs and the groove is “UNBELIEVABLE!.”   They are completely excited!!

Interview is up! This is the station is where David did the 108 second Q&A video session.

David missed the live interview, being caught in the Bostan traffic. He had breakfast with fans who won the meet & greet passes, including MJ from MJBigBlog site. MJ has posted more review and photos at her site.

Breakfast with David at Mix98.5 Boston

David with fans at Mix 98.5 Breakfast

Click here for the 4-part videos and photos posted by the station. You tube videos below….

October 30, 2008
David Archuleta
Well what can i say???? What a great time with David Archuleta yesterday. First of all let me tell you he is one of the most polite, honest and talented artists I’ve EVER met! (and I have met ALOT) He is a ‘what you see is what you get’ kinda kid’! When he was not on the air, he was the same as he was on. You don’t see that all the time. I donated an entire hour of programming to him, which i thought was the right thing to do. After all he is a star. So, some behind the scene stuff-The jacket he wore was from H&M. David was answering questions on our live video webstream when the mics were off in the studio. The questions came from around the world like , Germany, Israel, Honduras, and the Philippines! And he told me one of his favorite songs right now is from Jason Mraz called “I’m yours” (which we play on 92 PRO-FM). His dad Jeff is a GREAT guy. It’s obvious he and his Dad have a special relationship. Jeff, his dad, was very accommodating to our needs at the station and really is a nice guy. BUT- big thanks has to go to you our listeners. I know when you really like to meet someone or care about someone’s music you want to get close to them and tell them you love what they do. When we can, we try to meet your needs! Keep rockin and David told me he’ll be back!

No David interview audio or video anywhere yet. What we’ve got so far…

When David was on stage, waving to the fans, he almost punched a DJ in the face ….

So you gotta have the mp3 to keep and play it for your next birthday, right?

P/S: There are way too many radio stations in US, lol

Snarky Archies is reporting today on a comment posted at FOD by two fans who attended one of the recent radio station appearances that Jeff confirmed to them a solo tour starting in early 2009, with a second leg in the summer. I’m not ready to bet the bank on it until a word from Jive or at least another unrelated source, but this has been rumored for at least a month, now.”

“HI GUY’S… JUST HEARD FROM A FRIEND IN LA WHO WORKS FOR A MUSIC MANAGEMENT COMPANY!!!!
DAVID WILL HAVE HIS OWN SOLO WORLD TOUR OPENING IN NEW YORK LATE FEBRUARY OR LATE MARCH -OMG I FORGOT TO TELL YOU WHERE!! MADISON SQUARE GARDEN THAT IS JUST AWESOME! THE NEWS WILL BREAK ON SOME FEMALE DAYTIME SHOW!!!!”

The news is yet to be confirmed and there’s no reliable source but we all know how these rumors turn out to be true sometimes so…Fingers crossed!! Especially the WORLD TOUR part 😀

MJ met with David and Jeff at the Mix 98.5 Boston Breakfast and got some juicy titbits!

First things first: Here’s the information I managed to get from David and his Dad: There is a song that David wrote completely on his own for the album. It’s called “Falling” and it’s a bonus track on the iTunes deluxe version. He wrote the song when he was 14 years old. David wrote non-stop the two weeks before the album deadline, because he and Jeff felt there weren’t enough good tracks to choose from for the album. He wrote about 8 songs, four of them are on the album. He wrote the bonus track for the Wal-mart edition with Daniel Bedingfield. It’s an acoustic number, and the “heaviest” on the album. He also wrote “Don’t Let Go” with JC Chasez and “A Little Too Not Over You” with Matt Girard and Robbie Neville.

An article on David’s version of Angels :

The new single by American Idol runner-up David Archuleta is his take on Robbie Williams’ “Angels,” and the song is actually quite well-suited to Archie’s voice. (Honestly, the more I hear him singing normal pop-song material, the more I think that my aversion to him was rooted in the Up With People-like songs he sang during the competition.) Listening to this cover made me think that Archie would be smart to work with a producer who may fall outside of his dad’s comfort zone, but who helped create an album that had a measure of success this year..

Andrew of FOD created a MySpace test page for David..it looks..WoW. Jive, get moving and update that page!lol.

Attention everyone, this is to announce that the message contest is OFFICIALLY closed for entries. We will not accept anymore entries with immediate effect. Thank you very much to all those who submitted messages to David – they were all very beautifully written and he’s going to have a hard time choosing the lucky ones. The writers of the messages which are ultimately selected will be informed in due course. So good luck everyone. In the meantime if you haven’t pre-ordered the cd you can do so until November 5th.

We apologize for the technical glitch with the Sony Music’s Online Pre-Order Page. As soon as it’s fixed, we will inform you all via this site.

THE STAR (newspaper and online)

Archuleta Alert!! The Official Press Release by Sony BMG Malaysia regarding the Pre-Order and Contest for David’s Debut Album is finally out in The Star Papers! Wow! I just feel SO elated seeing David’s picture on our local papers! Haha! Show it to your friends/colleagues/parents/fans and non-fans alike and ask them to buy buy BUY David’s album!LoL.

Thank you Ai Sim for the picture scan! You’re FAST!! 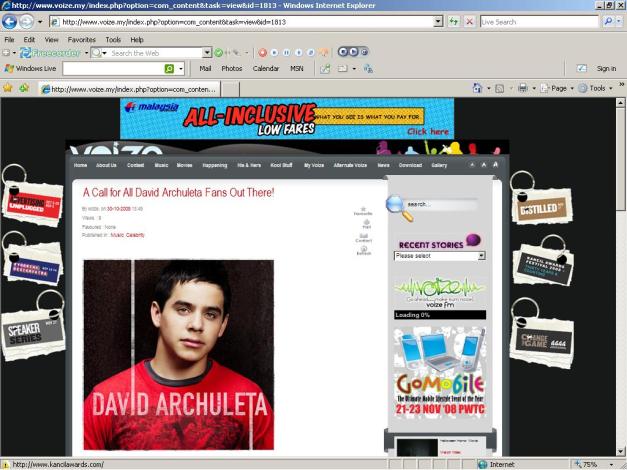 A Call for All David Archuleta Fans Out There!

Reminder : Tomorrow is the closing date for the Contest.

Head over to the Pre-Order & Contest Page!

The Album Promo Video is Finally Up! Take a Look and feel free to post it around youtube lol.

12 MORE DAYS TILL THE ALBUM DROPS!!

** Edited: I’ve pushed the other updates into a separate post below to keep things neater & organised =)

Apologies for the delayed updates! My internet problems is still unsolved and AAM staffs are very occupied at the moment so do bear with us but anyhow, if you haven’t seen/heard these radio interviews yet, here you go!Just click on the links for the MP3s (Links credit to FOD)

David Singing acapella Crush to a fan! You got me hypnotized so mesmerized David! (Its a wonder that girl didn’t faint there and then)

Check out the other videos HERE and HERE.

Today, I’m in Chicago, and have started doing radio promo stuff. I started yesterday in San Diego, then went to Seattle, then later to Milwaukee, and now I’m here in Chicago. Next, we’ll be in Pittsburgh pretty soon, haha. Last Friday, I was back in L.A., where I had a photo shoot. The photo shoot was just for some teen magazines, like the ones I’ve done before. It’s amazing how long it can take to just take pictures. I think I was there for like seven hours, and you’d think that pictures wouldn’t take that long, haha. But it takes a while to get what you need. You have to figure out which outfits to wear, and then get in the right mood for the kind of shot you need, I guess.

On Saturday, Michael Johns was throwing a party for his 30th birthday, and so I went with Brooke and her husband. There were a few familiar faces from the show and tour, and it was nice to see them again. Jason, Chikezie, and Cook were able to go too, so it was kinda like a little reunion with everyone, haha. Sunday, we were able to go to church with Brooke’s husband, which I rarely get to do anymore, so that was really nice.

Monday is when the radio promo stuff started, and so I’ll be doing that for a while. That’s where I go to different radio stations in different cities and just talk to them, and meet people who won contests for meet and greet passes, haha. It’s been a lot of fun so far, and I’ve gotten to see a bunch of people who I met during the tour. I’m looking forward to going to the next cities and seeing how it goes, and I’ll let you know how those go next week.

Let’s get some power voting going over at this polls!

Ali’s Blog (Very very close with Beyonce. Make sure to vote if you haven’t!)

And of course, don’t forget to vote at the radio stations too 😉 Crush is #7 on FlyFM’s MWC today! Its been there for more than 2 months!Great job angels! Keep requesting 😀

And a quick reminder : The Contest for the Album will be ending this Friday (31st Oct). So if you haven’t submit your entry, quickly do so! Don’t forget to Pre-Order to get your Album 1 week earlier! Spread the word too!

David Will be Presenting at the American Music Awards on Nov. 23rd!!

David Archuleta, Ashley Tisdale, Demi Lovato and T-Pain will present awards at the event, which will be hosted by Jimmy Kimmel.

Okay, folks, I think this definitely deserves a mention for spazzing purposes

It’s a daily chart. So keep voting. The album is dropping soon, all the more to maintain CRUSH up where it belongs! All the voting and requesting guide are at the Radio & Charts tab.

Wow, David did some more radio interviews and had fun surprising 3 fans at Q100 Atlanta who were the finalist for the biggest fan contest. What would your reaction be if David taps on your shoulder while you are rambling about how much and why you love him? I would probably shriek err…uncontrollably (and high-pitched enough to break all glass) and faint to my utmost embarassment. 😳

While waiting for Lily to upload the audio, you can listen to them at Fans of David. 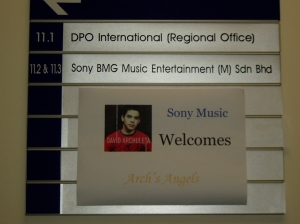 AAM met up with Sony BMG Music Malaysia on Wednesday, 22nd October to discuss some plans involving David’s album launch in Malaysia. Please head over to the Album Watch Page for the updates!!

Our appreciation to DJArox13 for being the gracious chauffeur for the day. We chatted about nothing but David, we sat in awe over David’s voice filling the air and we spazzed like fangirls 😆 . Thank you, DJArox13.