David leaps to #3 on VH1 Countdown! 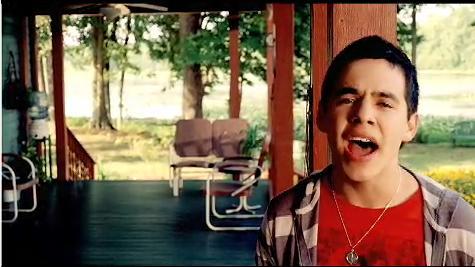 David talks about fliming on the set of iCarly, his blog at alloy.com and wishes his sister, Claudia a happy birthday. Aww… he is so archudorable!! 🙂 . David also advises fans to be cautious about ‘cyber imposters’ claiming to be him on facebook or myspace (excludes his official myspace) “It’s probably not me. Actually, I’m pretty sure it’s not me. So you might want to remove them from your list….. unless you’ve made friends with them or something.” 😀

You gotta catch us up to speed. What have you been up to the last few months?

David: For the last few months we’ve been on the American Idol tour. And also trying to work on the album while on tour.

What’s some crazy stuff that’s been going on behind the scenes on tour?

David: Well, I guess Michael Johns is always pretty crazy. I dunno. I dunno if there’s any crazy

No juicy gossip going on?

David: Not from me. I’m not a really good source for any of that stuff. Not even for my friends.

So now that you blew up on American Idol, how is the situation with the ladies?

David: [big laugh] Really, I’ve just been doing music. That’s all I’ve really had time to do, recording and stuff. So not really focusing on that kind of stuff quite yet.

Yeah, smart man. Do you think that the American Idol people cooked up the stuff about your dad always being an instigator on the show?

Or is he listening right now?

David: No, he’s not. But, no, that’s fine, it’s not a big deal if he was. I mean, he’s fine. He’s a good guy. I mean rumors always start. When you’re in this business I guess that’s what you have to deal with and that becomes a part of your life.

At this point in your career, is it everything you thought it would be?

David: It’s more than I thought it’d be. I never thought that, you know, it would happen this fast or this early in my life, if it ever did happen. It’s just really cool being about to work on an album. You know, it’s a lot faster than I ever imagined.

How did you come across your single, Crush?

David: It was in one of our first meetings and we were just talking about “OK, this is what – this is the plan, this is what we might, you know, be having to do during tour, fit this in here and there.” And so we were like, “How are songs coming?” And they were like, “Oh, we have a song. Wanna hear it?” And I’m like, “Sure!” and they played it and it was, you know, awesome, so we were just like, “Wow, we have to do that one.”

Being runner-up on Idol, did they talk to you about what you were going to have to deal with, or how to handle the media?

David: That’s what was so good about American Idol, it’s that it kinda was like training for what was in store for later on. And so I guess, you know, we’ve learned a lot just being there and having a lot of those kinds of experiences.

How does it feel to have older women – cougars, I guess – totally just loving you?

David: Um, well I guess it’s not bad as long as it’s not in, you know, that kinda desirable way. That’s kinda creepy. But you know I don’t see anything wrong with people enjoying music. You don’t have to be old enough to marry to like someone’s music. A lot of the people I like to listen to, they’re not my age.

I heard your first concert you actually saw was N’Sync.

David: It was a medal ceremony for the Olympics. It was one of those skiing – They just performed at that.

When you saw them, were you like, “I wanna be on stage doing that?”

David: Not at that point. Not really. You know, I’m still not. I don’t wanna be dancing around the stage. Heh.

Do you think you could do any of those moves if you had to?

David: No, probably not. Not even to save my life.

Who’s your favorite member of N’Sync?

David: Well, I’ve actually been working with JC. You know, JC’s a really cool guy, he’s fun to work with.

David, thank you for your time. And when is the CD gonna drop?

David: It’ll be coming out I believe November 11.