Posted by Archuleta Avenue Msia on April 30, 2017
Posted in: General. Leave a comment

David has a new zesty move while performing!

Now watch this vid of his performance of  PRIDE @ Houston TOFW.

Also observe him working that tuft of hair!

There were other Mini Subtle ones in between!   (Keep it up, David!)

I miss the bristles  … but this is even better!!!

David Archuleta is branding his own style of concert moves!   😀

Posted by Archuleta Avenue Msia on April 29, 2017
Posted in: General. Leave a comment 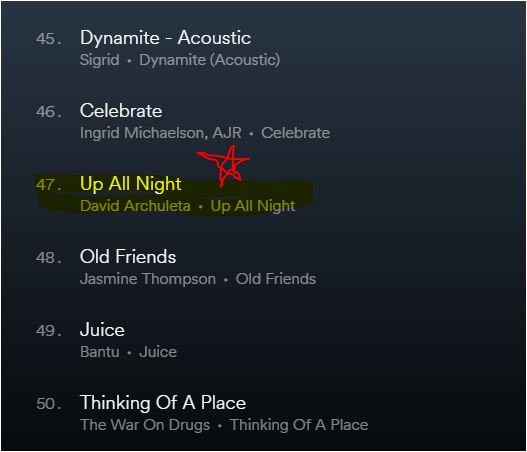 Hey everyone! @DavidArchie‘s #UpAllNight is on @Spotify#NewMusicFriday! Get on Stream &share!! Let’s raise the rank

This article from Forbes provides some additional insight into how streaming affects album performance.

Now That Streaming Can Make An Album Platinum, What Counts And What Doesn’t?

The RIAA (Recording Industry Association of America) changed the methodology by which albums are certified gold and platinum. As of this month, streams are now being included, which modernizes the entire process. Sales of singles and albums decline every year, while the streaming industry is booming. Since the way that the masses consume music has changed, so should the way the industry recognizes success. 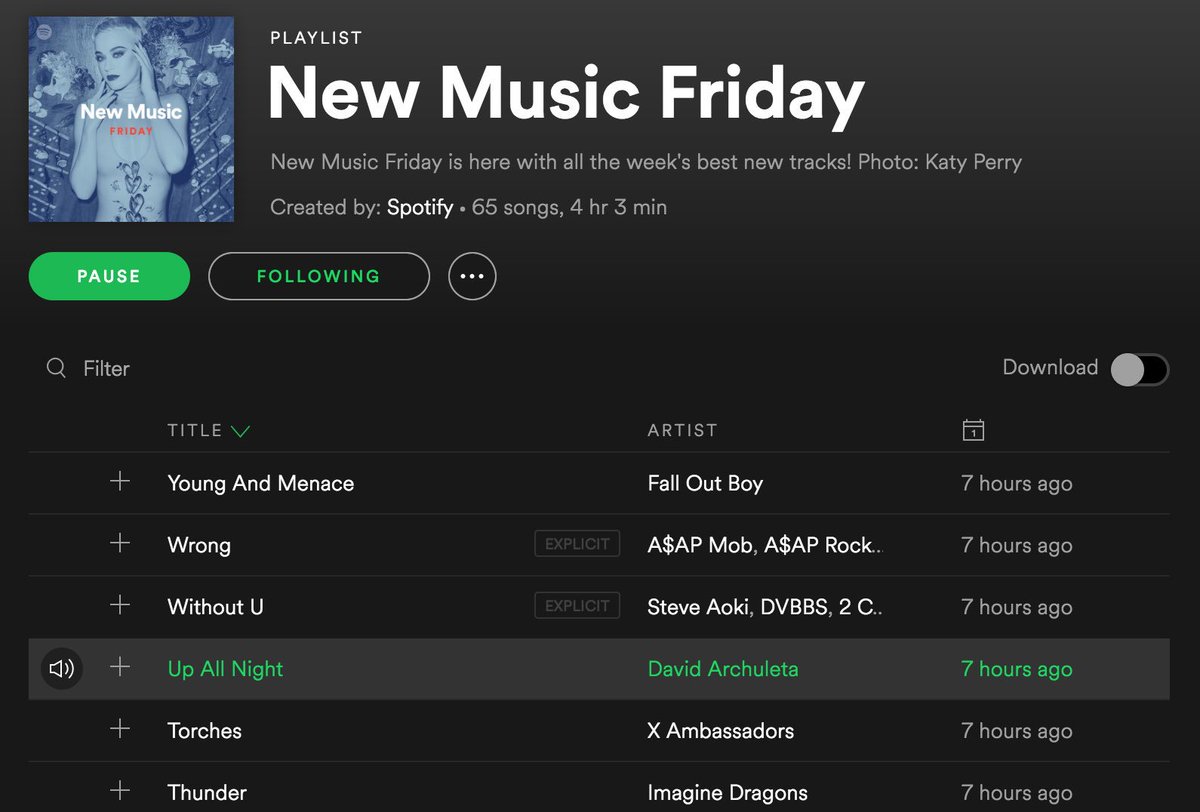 Posted by Archuleta Avenue Msia on April 26, 2017
Posted in: General. Leave a comment

David at the Anchorage TOFW Performance

David had a Facebook Q & A session with fans.    It was casual and unhurried.   And he sounded relaxed and comfortable.   He spoke about how he came to compose Up All Night  ..  that he misses Chile  ..  how the name of his EP ORION  came about – that “he is hunting his fears and going forward” –  “like Orion, he is catching the ‘beasts of fear and the demons inside.’   Nice description, David!   😀

Visit FOD for more highlights of the Chat.

Posted by Archuleta Avenue Msia on April 24, 2017
Posted in: General. Leave a comment

The 1st listen of UP ALL NIGHT really surprised me.   Not in a bad way.   Not in a specially good way either.   Just  ..  ‘Surprise!  Surprise!!   David Archuleta has given us music to groove to!!”

At this juncture of his newly-determined life, I thought his new music would be a little strait-laced or staid.   All of a sudden, we are getting DANCING MUSIC?   Man!!    It’s more than a little true to say “You’ll never know what to expect from that young man!!!”

“And all that production!!”  I thought to myself.   “No doubt he did a good job of it, but David Archuleta is one who does NOT need all that.   His Voice would carry him through!!   What is he doing?! Going Hollywood??”

I could not be more wrong.   I had another huge surprise.   David himself  .. the man himself  ..  the artiste himself ..  the great talent himself  ..  had to come into social media to make certain clarifications.   Read below:

But how did he make the music sound like that??  The fact that there is no Auto-Tune says alot about David’s talent.   Guess I’ll never know.   I’m more than a little music-technic dumb.   Neither do I care very much actually.   It’s the David Archuleta.   And that’s more than fine with me.   ♥

Both the melody and beat are catchy.   I could almost hum to it after the 1st listen.   2nd listen, I was up tapping my feet and dancing – well, sort of.   Groovin’, I believe it’s called.   3rd listen, I was looking for the lyrics.   Yeah, I wanted to groove and sorta sing in my shower, with David taking the lead of course, on my PC, at full blast in the next room.

Here’s some serious stuff David gave us during a People Magazine interview:

“‘Up All Night’ came from when I was having a really rough month trying to see how I could make a statement and prove myself and was getting nowhere,” David told People magazine in a recent interview.

“A family living in rural Tennessee invited me over to go fishing at their pond. None of the kids even had smartphones at the time. They took me in and when I got home I realized I felt whole again,” David revealed to People. “I was so confused with what happened that I couldn’t sleep. I had to get out what I was feeling so I went to the keyboard and recorded the verse and chorus with some lyrics that night.”

“Orion is the first in a series of EP’s that I have been working on since returning from a two year mission in Chile,” he continued. “I’ve co-written all of the songs, and they they tell the journey of where I have been and where I am heading.”

It’s almost impossible to imagine that David was having a “really rough time” when you listen to UP ALL NIGHT.    I’m glad he rose above his emotional disarray by giving us that song.

Now, for the Archies’ overworked cells of suspicion which of course he will never ever admit.    And good ole Archie speculation!    Read into these words!   Read between the lines!!!   😉   😉

“I was so confused with what happened that I couldn’t sleep. I had to get out what I was feeling so I went to the keyboard ….”

Anyway, that was just a bit of fun at David’s expense.    If the speculation is true, I’m glad David injects his Life’s grief and joy into his music.   No more the likes of just blue skies and chirpy birds.   (Just a matter of speech haha!)   A truer and deeper artiste he is becoming.   Whether he is making soulfully yearning songs or groovin’ dancing ones!    😀

Posted by Archuleta Avenue Msia on April 23, 2017
Posted in: General. Leave a comment

CLICK AND LISTEN TO SNIPPETS OF THE ORION EP!!

YOU CAN PRE-ORDER NOW! 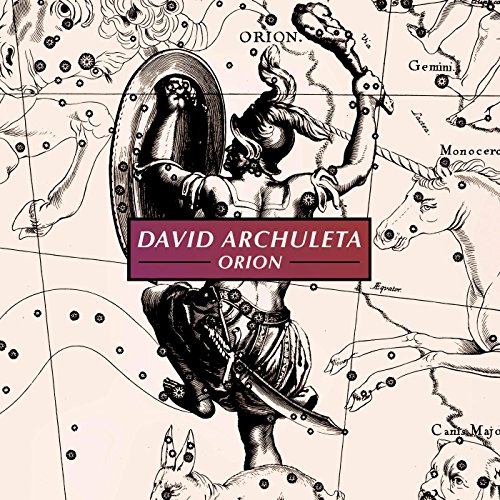 AND HERE’S A BONUS

FROM DAVID ARCHIE’S IG STORY TO HIS ARCHIES:

@DavidArchie David just sent us a smile y’all!!!! How can anyone not adore him??? 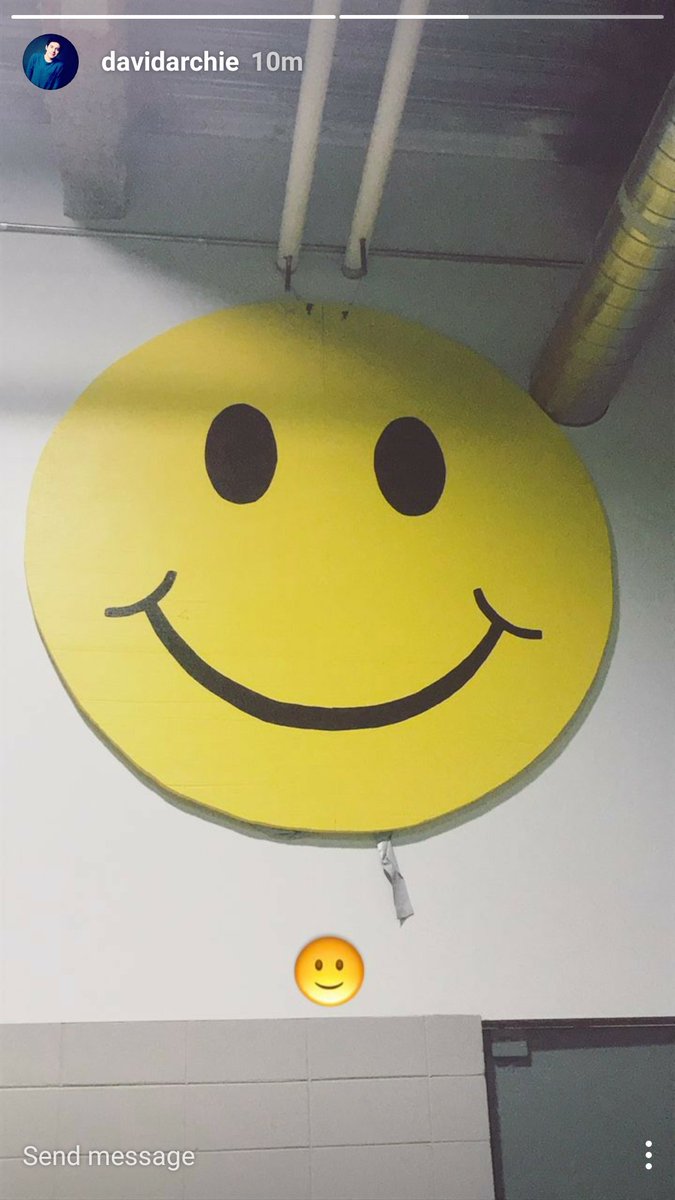 LOOKS LIKE DAVID IS VERY HAPPY!!   AND SO ARE WEEEEEEEEE!!!!

Posted by Archuleta Avenue Msia on April 22, 2017
Posted in: General. Leave a comment

Up All Night – Single  now available on iTunes!

View More by This Artist

The “Orion” EP is set for release May 19. The best news of all for David’s fans is that it’s supposed to be the first in a series of EPs.

He’ll also be touring this summer, and polls are underway on his Facebook page so fans can make suggestions on where he should perform.

A June tour, with 11 dates in the western U.S., has already been announced.

“Up All Night” is from David’s upcoming “Orion” EP, his first major release since 2013 and one that’s being dubbed as his “first truly adult album.”

Remember, David was just 16 when he auditioned for Season 7 of American Idol en route to a second-place finish.

And he was still a teenager when he released his first three albums.

In a Facebook chat with fans earlier this week, David, now 26, said “Up All Night” isn’t your typical up-all-night party song. It’s more about the thoughts that ran through his mind while he was up all night writing the song.

And fans apparently are, judging from their comments on Twitter. A sampling …

Bianca‏ (@missbianca): “I have @DavidArchie’s new song #UpAllNight stuck in my brain. I think it’s his best since Crush and deserves attention.”

Barb‏ (@EL_FOD): “Well, I’ve been #UpAllNight listening to this song, so must get some shut eye. Hoping this song gets the recognition @DavidArchie deserves.”

Deb‏ (@debz416): “@DavidArchie every time I listen to #UpAllNight I hear something new…it’s got more delicious layers than a #UnicornFrappuccino!”

I was pleasantly surprised by this song! Two thumbs up from me, David! 👍👍
Damn! Love it David!! Still listening to Numb.
iTunes Australia has @davidarchie #UpAllNight !!!
“Up All Night” @iTunesJapan で購入できますよ
I love, love, love Up All Night…can’t stop listening to it!
So simple and yet so powerful
Hi David , we love your new music #UpAllNight
I’m excited and happy at the same time bcoz he still keep on making good music.
I was up late listening to Up All Night!

Just can’t get over Up All Night! It ROCKS! 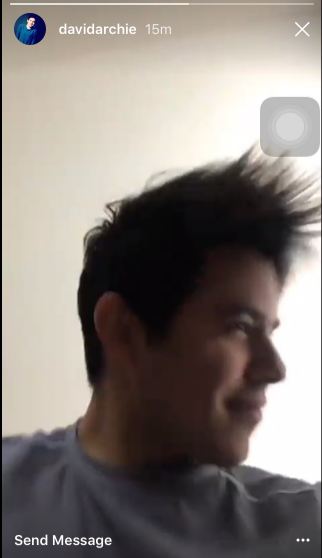 Let’s listen to the official audio instead, as tweeted by David.   😀   The lyrics are easy enough to follow.   TheVoiceDavidArchuleta has the lyrics.