Sorry that it’s been so long since I’ve made a blog! Just giving you a quick update though… or maybe it’s not so quick haha. Spending time with the family! Was in DC last weekend and headed to Cali next week. Had a fun time at Disneyland with the sisters a couple weeks ago, and had fun at corn mazes this week too. Let me know what you guys are dressing up as for Halloween!

p.s. I’ve had a really fun time watching and listening to the Myspace Karaoke Contest entries haha. Thanks for sending those!

Guys. He can’t even hurt a pumpkin. I am tempted to believe sometimes he is not real. 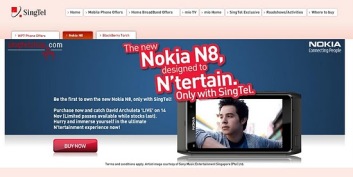 Babyfaced crooner David Archuleta will return to Singapore’s sunny shores in November! The 19-year-old singer was previously here in 2009 for a short promotional tour in support of his debut album.

This time round, the American Idol 2008 runner up will perform in an exclusive showcase on November 14 (Sunday). Fans would have to purchase the new Nokia N8 from SingTel to gain access to this exclusive event for now.

YES FOLKS you read that right.David is coming down to Singapore on Nov 14th!However, you have to purchase a Nokia N8 from Sing Tel for the passes..and the phone costs RM1690 or somewhere around there. lol yes i can imagine some of your faces to that. I had that exact same reaction hahaha. No news yet on KL and other Asian regions but yes..waiting we are..waiting as it is still being worked on…

Malaysia has it’s Vision 2020 – a statement of intent and plan of action to achieve developed nation status by the year 2020 ( fat hopes I say…but I digress 🙂 ) Here in Archuland our aims may not be quite as lofty but I sincerely hope that we will pursue them with as much zeal and commitment. Back in June of 2009 I posted an article called I Have A Dream in which I set up a petition to get David to hold a concert in Malaysia. The aim was to get 5000 fans to sign the petition so that we could then present the names to Jive and David’s management as proof that Malaysia had the numbers for a full concert. Well I just checked the numbers and I was pleasantly surprised to see that the petition has over 2000 names! Hot dang! I think that’s just fantastic 🙂

So our vision and mission for the coming months is to hit that magic number – 5000. Sure Sony is negotiating to bring David over in the 1st quarter of 2011 but that’s far from being set in stone. I think we shouldn’t leave it to chance. I say we go and get those numbers in. Therefore our own Vision 2011 is to make a David Archuleta Concert In Malaysia a reality!:

And THIS especially. Trace take note 😉

But the most memorable and precious moments of all:

Lets make them happen all over again shall we? Go Archies!

Posted by johnchang on October 24, 2010
Posted in: General. 3 Comments

No not David’s so calm down lol 🙂

Well it seems the new Mr and Mrs John De Forest Jr made a great choice for their wedding reception music:

So says Ms Melody Goh of the The Star who reviews newly released music. I almost choked on my breakfast of noodles when I read her review of TOSOD. In addition to that she also described David’s vocals as being ‘monotonous‘ and suggested that it was ‘in need of improvement‘. What the random!! 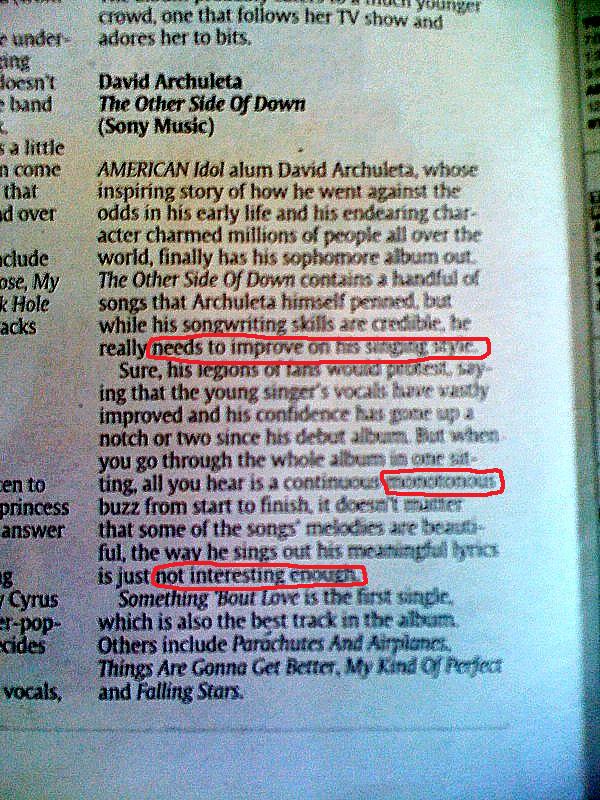 Suggesting that David needs to improve on his singing is like saying the Taj Mahal needs renovating (perhaps even a fresh coat of paint?!) and that the Grand Canyon is not deep nor wide enough (shall we get out the shovels and start digging?). I wish people who don’t even have the slightest smidgen of an idea about singing would kindly keep their opinions to the occasional bathroom ramblings and not see fit to print them in the papers.

Perhaps she should confine her reviews to hogs wailing which I’m sure will keep her enthralled. Please feel free to bombard The Star with your snarky comments. Sheeesh!

Posted by johnchang on October 24, 2010
Posted in: EKS Challenge. 4 Comments

This is from NeonLimelight and horrors! Doesn’t he look kinda Bieber-ish? 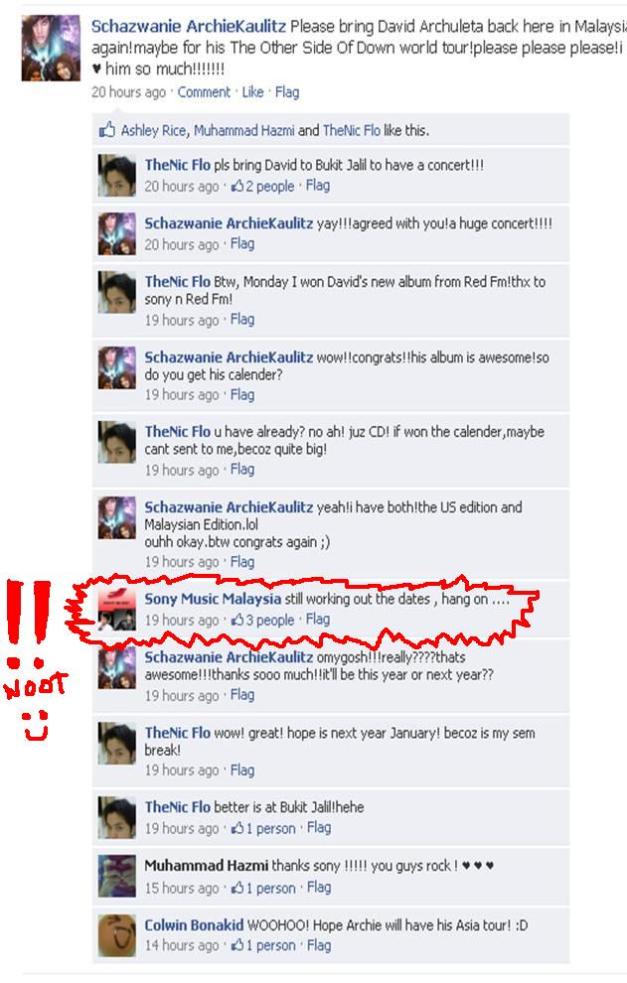 This whole week is David Archuleta Week on Red FM!

They will be giving out The Other Side of Down albums to listeners as well as those who submit their entries online. You can check out the details at their site HERE!

Don’t you guys just looooove seeing this on your computer screens?!! Great promo!Not to mention that they also play other songs like Zero Gravity, etc for the CD giveaways!Woot woot! So if you guys wanna win a CD (or a 2nd..or 3rd..to give away of course :P), listen in to Red FM this entire week or try entering online! All the best! 😀