Posted by Archuleta Avenue Msia on May 29, 2016
Posted in: General. Leave a comment

Posted by Archuleta Avenue Msia on May 26, 2016
Posted in: General. Leave a comment

I wonder if people really prefer to listen to studio recorded music to Live shows.   Afterall, studio recordings are designed to achieve optimum acoustic perfection and producing music that has been honed to the very best.  And there is a host of specialised software to manipulate and route the sound.

I confess I have not been to many Live pop concerts.   The ones I  could not resist and have been going one after another belong to one guy named David Archuleta.   For him, I flew around this region in Asia to attend, rushing for the best tickets, spreading myself  and my Archie mates out on the seats (initially) right in the centre of the front row.

Not the best idea – front row.   You either spend the whole time watching his toes  …  I mean, shoes (nice shoes no doubt)  … or end up with a sprained neck, looking upwards all evening.   Or be showered with the dust he kicks up while he is dancing impassionedly just a few feet away above your head.   Next time – if there is a next time (can’t you tell he is avoiding Asia!!!   😥   )  –  I will settle for the 4th row, where I can be at eye/face level with him so that he can enjoy my looks of utter approval haha.  (Then again, why opt for being 25 ft away when you can be 5 ft away from the great one?!   😉   )

But of course I will without doubt settle for studio recordings when there is no choice.   Seriously, do the Archies in Asia have any choice??

I might even one day decide to go for a non-David concert if the company is congenial and my pocket abundant, but for a David-concert, I would beg, borrow or .. no, I don’t steal  …   😉   )

Excessive studio tweaking can make music soul-less since it involves the work of technicians and engineers and some things  ..  arrrggghh  … called machines.  Even though David’s studio- recorded songs were not heavily processed or edited, there was still a slightly underwhelming effect.   It is almost as if his singing in a studio and singing Live onstage belong to 2 different skills.

His energy comes through from the stage.   He is more involving when he is singing in the presence of an audience.   His story-telling is more effective.  His connection is more far-and-deep-reaching and … complete.

I’ve always felt that Glorious was a pretty song.   That was before I heard it sung Live.   Now, to me, it has become a humane song, like he is telling me a story  …  a human story.   Look at how he connects to the audience with his singing and expressions.   I can see myself with rising goosebumps if I were there.

And this  –  David’s passion with his own real story – NUMB

Very often, Live shows are too loud, too noisy.   It is my belief that many go to such shows to stomp off their pent up energy or to pelt out a good sweat.   And why not? if one has an abundance of repressed energy and sweat to give out   😀

David has come of age and has found the kind of music he wants to represent, the kind of energy he wants to wield to connect with his listeners.     Much as I have liked his fun-songs of the past, I am actually preferring his current songs which hold deeper meaning and passion that is more real and raw.   If  I were to attend a David-concert again, I know I would take great pleasure in being in the same room with one who can look me in the eye while he sings his heart out.

But if I were to be stuck with studio recordings for the rest of my *sniff * miserable life  …  that’s ok too.   You know what they say about “beggars not being able to be choosers  …”   😥

A Well-earned Dish of Hummus!

Posted by Archuleta Avenue Msia on May 24, 2016
Posted in: General. Leave a comment

Time for a rest and to feed the tummy

with some energy food! 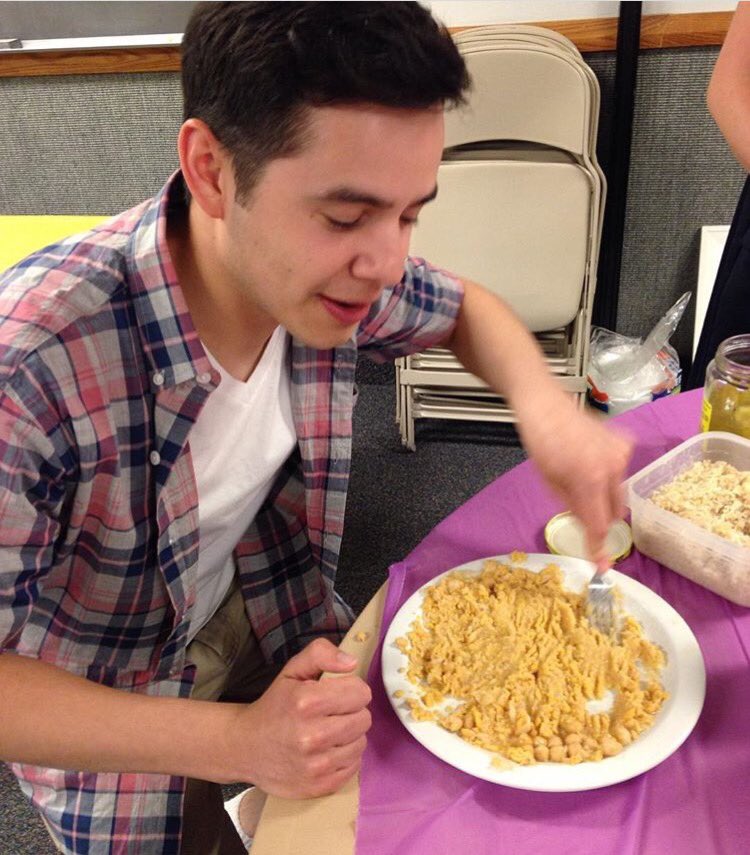 “Ever tried making your own hummus? I did. With a fork. #notchickpeas #hummus #food”

Yeah, you could almost see the joy in his clenched fist and through his eyelids  …  feel his excitement as he speedily works his fork, smashing the chickpeas to make his well-deserved hummus!   😀

David is in a good place.   Spending time singing his heart out  …  Singing the kind of songs he likes to sing  …   Satisfying his appetite  …   Rewarding his vocal cords which have served him well  … with great healthy food  …

Now go work on that album???

Posted by Archuleta Avenue Msia on May 21, 2016
Posted in: General. Leave a comment

In this pic, we see David Archuleta  …  and we see the Music

Rehearsing for an intimate performance this afternoon at Chapman University’s Interfaith Baccalaureate Service in Orange, California. Beautiful theater here at the Musco Center for the Arts! #ChapmanUniversity#Interfaith #Baccalaureate

♥ OUR FAVOURITE PICTURE OF ALL TIME ♥

We love it for all kinds of reasons.

It’s what David Archuleta is about.   His connection with music  …  his song  … and his total absorption when he is singing.   Nothing in the background matters, even when it’s a beautiful concert hall.

It is empty during the rehearsal but it is filled with wondrous spirituality.   You can almost hear David’s voice ringing through.

You can feel everything he stands for and is.

(Lyrics from Sounds of Silence)

Thank you Kari for taking that wondrous picture!   ♥

He Lives In You

Posted by Archuleta Avenue Msia on May 21, 2016
Posted in: General. Leave a comment

This beautiful song from The Lion King –

From Pop to Humanitarian Artiste

Posted by Archuleta Avenue Msia on May 17, 2016
Posted in: General. Leave a comment

David Archuleta performing in a humanitarian concert in the Balkan country of Slovenia is, I think, one of his ways of “giving back” for the “good place he is at” these past years.   He does not want to see himself as just a rock star whose only purpose is to sell records.

Like Bono of U2 helping the less fortunate as a philanthropist and Audrey Hepburn turning into a UNICEF Goodwill Ambassador later in life, celebrities of the entertainment world have been contributing their time and energy to doing humanitarian work.

On the personal level, I believe it is about “getting over oneself”, which, I think, is one of the best things that can happen to one who is celebrated by the world.

Mahatma Gandhi says:  “Whatever you do as a humanitarian may seem insignificant but it is very important that you do it”

It is a mental process to change the world  –  our psychological aspect will evolve from silence, ignorance and apathy to a universal language of heart.

The power of human empathy through music cannot be under-estimated  …  to draw attention to causes which need collective support and collective action  …  to save lives or to make lives better  … to make a difference to people of equal worth and dignity  … and especially children who are suffering from ailments through no fault of their own.

David’s participation in this concert to support help for the children with congenital heart problems is his message of inspiration to the world.

Yes, much of the world needs to be awakened and changed.

Even if it is just playing a baby bongo sometimes.   😀