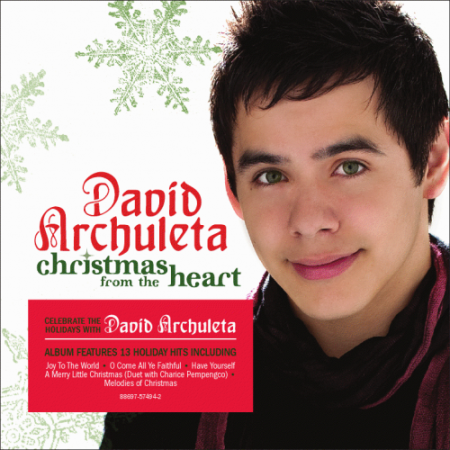 We have received updates from Sony Malaysia regarding the pre-order for David’s Christmas album. Please read carefully as there are slight changes to the mechanics.

You can choose to participate in EITHER ONE of two methods stated below:

END_OF_DOCUMENT_TOKEN_TO_BE_REPLACED

David at Covey Center for the Arts

There to show support to Kendra and guess what?! Surprise guest singing TBWY with Kendra 😀

MP3 and MP4 thanks to Sheila!

YES YES YES. it definitely WORKS FOR ME.

Thanks to David Archuleta Vietnam for the find!

The Crush Ringtone by David Archuleta has quickly become one of the most popular ringtones in the world. It has peaked at #1 on several popular mobile charts and is currently #2 on the US iTunes Top Songs Chart. Based on its popularity, the ringtone might soon become one of the most popular mobile phone ringtones ever released!

Crush is the debut single by David Archuleta, American Idol seventh season runner-up. The track was written by Jess Cates, Dave Hodges, and Emanuel Kiriakou. A digital download of the song became available on August 12, 2008. After just one day of airplay, Crush was able to debut at #93 on the Billboard Pop 100 and #57 on Pop 100 Airplay. The song is also currently one of the most added tracks at Mainstream CHR radio stations.Following the song’s digital release onto the U.S. iTunes store on August 12, 2008, the song rose to the #1 spot on iTunes in less than 24 hours. Crush debuted on the Canadian iTunes store at #2 and is expected to debut on the Billboard Hot 100 next week.

The popularity of the song has helped make it such a popular phone ringtone. The track has also topped Canadian and Australian music charts, making the ringtone very popular in those nations as well as in the United States.

There is no doubt that David Archuleta’s incredible new hit single will end up being one of the most popular ringtones of 2008. If you’re looking for a hot new ringtone for your mobile phone – the Crush Ringtone is an awesome choice!

An Email from ggdoorsfan to remind us to request for ZG on Aol Radio. Thanks ggdoorsfan!

This Tuesday, July 21 from 12 pm ET to 7 pm ET, fans will once again be able to request their favorite songs using Twitter to be played on our “All Request8 0 radio station, which will launch at midnight, July 22nd on http://www.aolradio.com

If the song is in our library, we WILL put it in the playlist. The station will be available on AOL Radio for one week.

Artist Name, Song Title #aolradiorequest
(example: Daughtry, No Surprise, #aolradiorequest)
————————————————————
You can request as many songs as you’d like, or request the same song over and over during the time period. All tweet requests MUST be in your public feed. No replies to @aolradio or direct messages (DMs) will be accepted.
Last time, Michael Johns, Collective Soul and David Cook fans prevailed. Which bands will get the most requests this time? Remember: The more votes a song gets, the more often it will be20played on the station.
We look forward to your requests (and playing them) next week!”.

Hanging out with Buddies!!

David got to hang out (and sing no doubt) with his pals Brooke White, Michael Johns and Benton Paul at their show in Utah!!Niiiiice!

Aww what a lovely family. Courtesy of Archuleta Fan Scene

RSO’s Charity from the Heart Update

Update on RSO’s Charity from the Heart Campaign from David Beyond Borders:

The “Charity From The Heart” campaign to raise funds among fans world-wide has now gathered close to $1,000, 100 donors, 10 countries and 20 Pathway of Hope bricks to benefit Rising Star Outreach in David Archuleta’s honor.

The campaign has been extended to October 15, 2009, so you have until then to donate.

For help to donate, email davidbeyondborders@gmail.com or tweet me at Larissa_SG before October 10, 2009.

Bricks and their text donated so far: 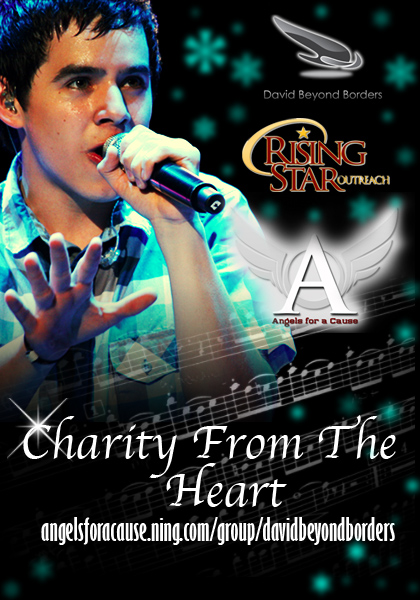 – Larissa on behalf of Angels For A Cause

PS: I’m sending the AFAC bracelets to those who donated US$5 and above. Please bear with me as I have a ton of bracelets to mail out.

If you wish to contribute to this great cause, you can find more information about it HERE! Feel free to email us or Larissa at davidbeyondborders@gmail.com to find out about payment details and such!

It’s getting closer to the release date folks. Are y’all excited yet? Well plenty of folks are rushing to Amazon to pre-order their copy of David’s Christmas CD making it the no 1 holiday album to date. We in Malaysia have to wait for October 5th – only 11 days more! I can positively hear the bells jingling now 🙂 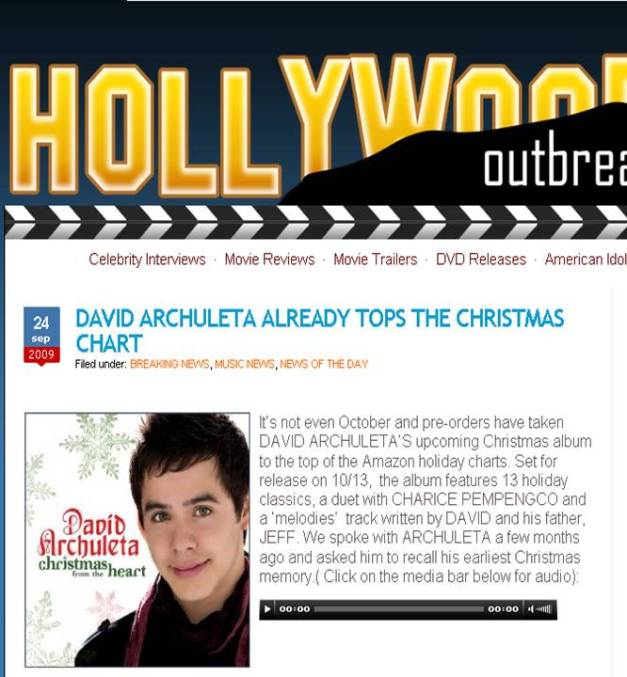 Go to Hollywood Outbreak to listen to what David has to say about Christmas.

This is a privately initiated project run by ABC correspondent John Donvan who is asking for nominations from people whom they think are  good role models for youths. Of course the obvious nomination would be our resident songster extraordinaire. So please go to John Donvan’s twitter JohnDonvanNL and lay your love for David on him. If you wanna know more about John Donvan’s background go HERE for the full details.

These are special times

Even though I’m not a Christian, it is by far my favourite holiday season of the year. The magic and the allure of Christmas is always something I look forward to. The merriment, lights, sounds and palpable feeling of goodwill that floats in the air lifts my heart like no other occasion. It’s religious aspects never enters my mind and doesn’t prevent me one bit from reveling in the joys of the season. I sing the Christmas tunes with gusto and heartfelt reverence never mind that the god in reference “isn’t my” god. For me Christmas is such a beautifully gentle time where people can truly wish each other good tidings with a genuineness of heart and honesty of spirit.

I remember the Christmas parties that my family used to hold in years gone by. There would be food, drinks, laughter, presents, a Christmas tree and most special of all – friends. Friends of all religious, cultural and racial persuasion. It felt and looked like a mini United Nations in those few precious hours that we joined together in spirit and enjoyment. We didn’t care that many of us weren’t Christians and that we were celebrating what is fundamentally a Christian religious festival, we cheerily rejoiced in each others’ company content to let our guard down and see each other as people with the same basic aspirations, values and principles. The ties that bound us were colourless and odourless but unlike venom, it didn’t poison us  for we ate, drank and were merry together. It was so easy and natural to wish each other “Merry Christmas!” with a smile and mean every word of it. The important unifying elements of fellowship and human connections were all that mattered. Those were really special times.

This year Christmas is arriving rather earlier than usual with the impending release of David’s Christmas  CD in October. Christmas and David just goes together so well like the two sides of a coin, Romeo and Juliet, where one ends the other begins. Thus it’s truly fitting that David should release an album of Christmas standards with perhaps  one or two original compositions thrown in. Having listened to him sing Christmas songs in the past, I’m pretty sure this album will be the best Christmas present that you can give anyone this year. This holiday season is exceptional in more ways than one as we await the arrival of this Christmas treasure. It’s heartwarming to know that we are all waiting with the same delighted anticipation, in the face of our differences, for an album that’s steeped in religious traditions.  It speaks volumes of the ability of David to draw us together in unity and common purpose.

In a world where a man of African descent can be elected to the highest political office of a nation with a history of  racism and slavery; where the lines of skin colour , once so divisively sharp, which are now increasingly being blurred; a world where Malaysians from across the divide, without the albatross of religion and culture hanging round our necks can come together to extol the musical artistry of a young Mormon man  gives me hope. The true spirit of enjoying and celebrating each others’ religious rites lie in the knowledge that we can find common ground to stand upon because we are after all of the human species. United in our common failings and triumphs we really are not so much divided by an unbridgeable chasm, as so many are wont to insist and stridently trumpet for all to hear, but rather more of an unwillingness or perhaps even fear to walk a mile in the others shoes. But when we come together and salute David and his music we demonstrate that we can overcome such prejudices by  judging each other solely on the merits of our actions and not the colour of our skin or the ritual observance of our particular beliefs. Hit us and we cry the same tears, cut us and we bleed the same red blood, tickle us and we laugh the same laughter.

Even in our various  human disguises, we embrace the same celebration of excellence and relevance. We dance the same dance of joy and sing the same song of love when we are faced with artistic brilliance no matter the colour in which it comes in. It garners the same emotional connections and spiritual uplifting and we share in the same joyous moments. These then are the truly special times when we willingly shed all our inhibitions, bigotry, misconceptions and just immerse ourselves in the same collective consciousness and exult in the magic of a sweet, soul stirring vocal virtuoso from across the Pacific.

* For more insights into the singular biological cord that binds the human species – DNA – please be sure to watch ‘The Human Family Tree‘ this Saturday  at 9pm on Astro 553. The premise is that from a genetic perspective every human on Earth today is descended from a  group of Africans who left Africa some 60,000 years ago!  Now if you believe the geneticists ( and why shouldn’t we? ) we are all, in effect, Africans and that yours, mine, David’s and all other members of the human race’s  family tree can be specifically traced back 60,000 years to a single African man. Adam if you will – genetically speaking. How cool is that?