AKA “The song that never dies”

David Archuleta, Crush (3,000 weekly/1.884 million total — this is a more specific figure than the rounded one gave a few weeks ago, which only took the total to one decimal place)

David at the FNF Grammy Party!

PRAYER OF THE CHILDREN VIDEO FROM MTV NEWSROOM

David Archuleta is listed as one of the major donors for “Plane to Haiti”.  Check out more HERE.

David Burger of Salt Lake Tribune reported about this on his blog, Burger with Relish blog.

MTV BACKSTAGE DURING THE TELETHON

– Haiti Relief – donations from Peace.Love.Cupcakes when you buy a virtual cupcake in Jim’s and David’s names

– Arch Angels Relief – for the most sorted video of David’s gorgeous and heartfelt rendition of PRAYER OF THE CHILDREN for the MTV producers and crew during his interview.

Most telling statement : “They don’t call you guys Arch Angels for nothing.”

Plus, David needs to/should/must record POTC already. No one sings it like David. Proceeds, of course to charity?

Last Friday’s “Hope for Haiti Now” telethon was a smashing success. Not only did it raise a stupendous amount of money for earthquake survivors in Haiti, but it also spread the word that the generosity needs to continue through the coming months. The fans of “American Idol” alum David Archuleta took that message to heart and spent their weekend raising even more money for Haiti in the form of a “virtual cupcake drive,” partially in my honor. Seriously!

Here’s the story: MTV News correspondent Sway chatted with several of the participants of the telethon Friday night, including Archuleta (or as I call him, Archupuppy or Archadorable — depending on my mood). Sway noticed that David was humming to himself before their interview began, so when it came time to roll tape, he asked the “Idol” star if he wanted to share a song with the world.

This should come as no surprise to Archie’s fans, but David happily obliged and treated MTV News to an impromptu (and heart-stoppingly gorgeous) rendition of Kurt Bestor’s “Prayer of the Children.”

I casually tweeted that we had witnessed a spur-of-the-moment mini-concert from Archuleta, and within seconds my Twitter was inundated with pleas from David diehards desperate to see the video footage that I had just bragged about. What started as half-joking bribes of cupcakes snowballed into a virtual cupcake drive. To donate to the Haiti relief effor, send a TwitPic of a cupcake to@jambajim! (You can see this ingenious idea develop by checking out the timeline on Peace Love Cupcakes.)

By Tuesday afternoon, a generous group of fans had raised $3,850 in mine and David Archuleta’s names! As David would say, “Oh my gosh, Ashley!!”

So to @janey79, @karenkid, @momJulee, @BeckyFOD, all the David Archuleta fan sites and blogs who helped spread the word (as well as the dozens of fans who donated money), I’d like to thank you from the bottom of my “Idol”-addicted heart. Your dedication and ingenuity is an inspiration to us all. They don’t call you guys “Arch Angels” for nothing.

See what I mean? Even Just Jared Jr. blogged about POTC. Haih. 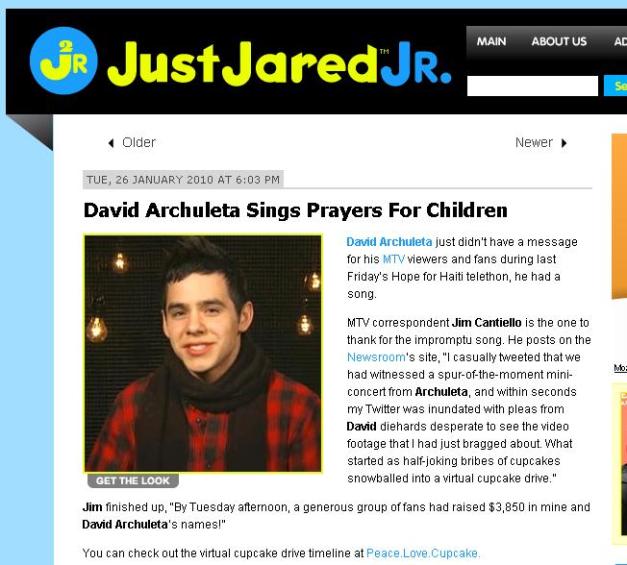 The Starkey Hearing Foundation is teaming up with American Idol and national recording artists, Jordin Sparks and David Archuleta, to deliver the gift of hearing to 100 children throughout the Miami area. The mission is scheduled for Wednesday, February 3rd from noon-4pm at the Eden Roc Hotel on Miami Beach. The mission will be followed by a special performance by American Idol Stars, Jordin Sparks and David Archuleta

This mission would not be possible without the support of our sponsors and volunteers. Special thanks to the NFL Alumni, Sproutloud, Comcast, Call Source, the NRA, Delta Zeta, Sparks Charities, Clear Channel, Publix Super Markets Charities, Royal Caribbean and the University of Miami’s Medical School – ENT Department.

During the hearing mission, SHF is excited to welcome some of the friends of the foundation to join in the day’s activities including: Jordin Sparks, David Archuletta, Lou Ferrigno, Larry Fitzgerald, Sam Moore, EJ Henderson, Bernard Berrian, Leslie Nielsen, Ethan Bortnick and more.

Press conference and celebrity introductions will be at 11:45am. LIVE WEBCAST WILL BEGIN AT 11:45am EST.

Yes, David continues his work on the second pop album……

This week, David is working with these awesome peeps:

He managed to slot in Mario Kart game challenge with Nasri, in which he lost.

The fans have so many wishes, dreams, requests, hopes, expectations….and demands. Must be wearing David down to please e-ve-ry-one? One thing I hope. He be happy with the finished product.

And yo, Jive or David or Azoff, you guys can lock up all the extra and unreleased demo songs for now but puhleese unleash them when the RIGHT time comes. You know when. You guys are good at those stuff.

A new song for @DavidArchie. I.AM.EXCITED.

BIG thanks to Flipangel34 for putting them up on youtube! Check out all the videos at her Page.

Here’s one of them : The Riddle

All right, I’m sorry for that amazingly annoying clicking noise! I didn’t hear it while I was making the video. But it’s too long to redo the whole thing.- Sorry that this is so long! But I just felt like I needed to talk a little more about helping Haiti. It’ll make up for the lack of blogging right? haha. I’ll try and teach myself how to shorten them in the future. But Thanks everyone who’s been donating and helping Haiti! I had a great time in Central America and can’t wait to go back! Can’t wait to start more writing sessions next week, and thanks on behalf of me and my sister for all the Japanese culture items! haha.

David staying back to continue answering phones even when the cameras were OFF. Reminds us why we love him so dearly.

Can’t embed the video here so click HERE to watch it (:

D and Selena. They kinda look like siblings ya know.Well that was my first impression LoL.

Some pictures from the telethon!

Spot him at the side lol.

Someone sang backstage too (: We shall wait patiently for the video. Thanks Jambajim ❤

Malaysians, you can lend a helping hand to the Haiti Relief efforts too! Pay a visit to UNICEF’s website to find out how you can help: http://www.unicef.org/malaysia/

Thanks aKang for pointing this out!