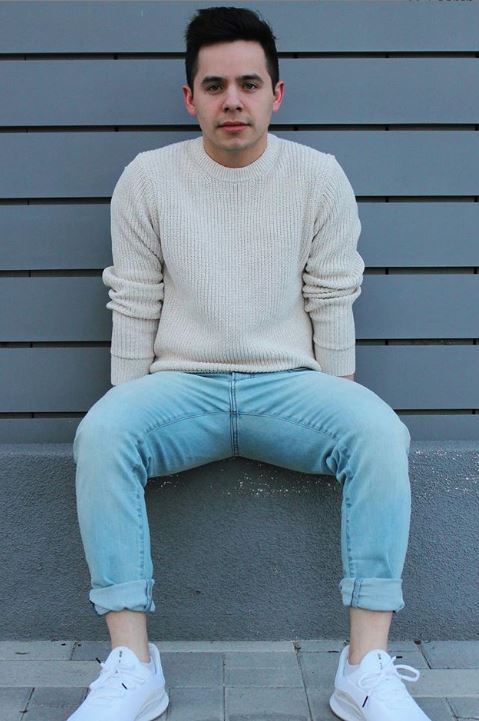 So this Instagram pic is inviting much interest and wonderment.  Why is David Archuleta not smiling as usual, many ask.   Worse – why is he so expressionless??  Is he unhappy, many want to investigate.
Busybody moi want to investigate too but my intruding mind doesn’t think he has had a recent unhappy experience. I think this pic is portraying David at his most truthful.  He is just being David.  The real David.
He used to smile alot.  And I mean ALOT.  Sweet angelic smiles which he couldn’t make unangelic even if he tried.  But David is different now.  He wants to be more human – more himself – not the sweet boy image everyone thought he was or wanted him to be.  As a singer, he wants to have more edge.  Grow some hot bristles on his baby skin now and again, so what?  Why can’t a guy not shave when he is feeling lazy on certain mornings? Keep chopping off his heavenly mane shorter and shorter til there’s hardly anything left (sigh!  ..)  despite all the noisy outcries from archies and foes ..  so what?  David just wants to be David.  Even a little crazy or illogical sometimes.
Sugary baby blue jeans topped with a saccharine white sweater.  Height of clean, virtuous good taste.   But no sweet, entrancing smiles today.  No siree ..  He wants his own skirmishes and conflicts.  He is facing his own world and his own combats.  Straightfaced and Uncompromising.
Despite whatever that seems incompatible or conflicting to the norm, he will not apologise.
Or smile ..  if he doesn’t want to.
My respect of him as an artiste is growing more and more.
Saw this nice comment below.
People are beginning to re-discover David.  They will re-discover his amazingness.
Gradually but surely, he will rise and be reborn as the phoenix in Greek mythology.
btw, came across this review for #PostcardsInTheSky on @amazon and couldn’t agree more… more peeps need to hear these aMAZing songs!