Posted by Archuleta Avenue Msia on December 22, 2017
Posted in: General. Leave a comment

I saw this rather amusing video which cracked me and my family up.  We’ve never heard Christmas songs sung this way before.   😀

But of course this hilarious guy Motoki had intended his performance to be fun and to spread some festive laughter.   His expressions and gesticulations are excessively exaggerated.   But all done in the name of hilarity and comedy.   I’m all for it.   We do need some light-hearted moments and amusement amidst the reverent silence of Christmas prayers and hymns.   Goodbye to 2017 dreariness!  (If any   😀   )

Which brings me to thinking about Expressive Singing.   Such a wonderful thing  –  emotiveness in singing.    It adds texture to the singer’s performance.  Like, you could grunt and holler in grief or in ecstasy.  Or you could sing in love’s tender whispers.   Or in sober reverence as in Christmas hymns. 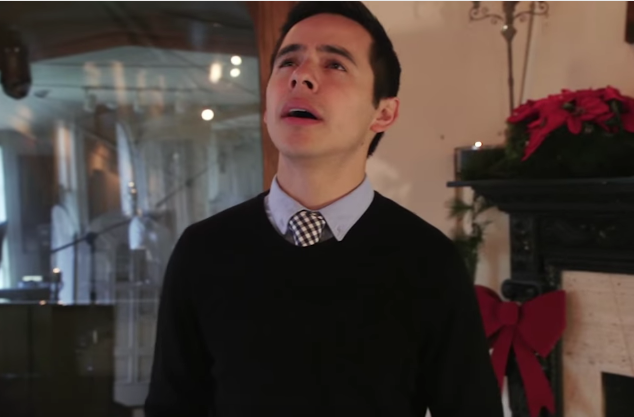 Motoki is singing with the uttermost facial expressions he could muster.   I’m not saying David should exaggerate his expressions to this degree (OMG ! no way LOL!)   What David is doing now is perfect.    He has been improving by leaps and bounds in this game.   He is now the epitome of expressive singing.   He makes sure his every lyric, every note is represented on his face, also his hand and body movements.   He is living his lyrics.   And his music.   But he is a subtle guy.   Just enough.   No more, no less.   It’s called Skill.   It’s called Class.   ♥

Showing off vocal ability alone is not interpretation.  Even if you sing like an angel, and the facial expression does not connect to the lyrics or the music, the performance could fall flat and the audience is not convinced   (not including choir singing here   😀   )  Facial expressions, hand gestures and body movements can enhance the communication from singer to listener and the mood of the song, thus making it more entertaining and moving to the audience.

I have to post this video again.   Simply because David did such a great job in expressing the mood he has chosen for the rendition of this song.    His face, expressing a little old-style charm and body swagger make the delivery complete and totally convincing.

And this!   In the video below, his face and movements express infinite conviction, persuasion, stance.   You can’t help but be swayed and won over by the beliefs he is trying to convey.

Night
And the spirit of life
Calling
And a voice
With the fear of a child
Answers
–
The lyrics are beautiful.   The song is beautiful   And David made everything utterly more beautiful and believable by his expressions of face, hand gestures and body language.  (his voice is another story   😀   )

WISHING DAVID AND ALL THE ARCHIES A WONDERFUL CHRISTMAS