A little bit of heaven – By Marianne

26th July 2011 – I went to school in the morning but half of the time I couldnt concentrate at all haha. Cheryl and I kept talking about the concert in class and we were really really excited! I couldnt believe “the day” has finally come. I’ve been talking about this since the day I found out David is coming here. Even those of my friends who doesnt know about David coming for a concert or even some of them who sadly dont even know David, they knew all about it from me because of the AAM contest that I took part in (http://www.youtube.com/watch?v=EYnWgkDRXF0). So Im quite happy in a way that I got to spread some Archu love around while doing this video haha 😀 So, school ended at 1.10pm and the second we heard the bell rang, Cheryl and I quickly grabbed our bags and walked really fast back to my house. My house from school is about 5 minutes walk so it didnt take that long. When we reached home, we quickly had our lunch and showered and we left the house at 2.30pm to go to Kelana Jaya LRT Station. When we reached the station, John fetched us to Stadium Negara. Thank you John for the ride!!! 🙂 We reached Stadium Negara around 3.30pm and we just hang around there with the other fans. It was really hot on that day. I remember when David’s showcase in 2009.. it was raining but this time it was the opposite! When it was time for the soundcheck, I could hear David singing from outside! I was standing so close to the door because I wanted to get a clearer sound and also because of the air-cond 😛 Ahhhh hearing his voice was just so awesome. Its like you cant even tell if he is really singing or its from the CD. It is that good! The part when David sang Everything And More and in the middle of the song he used his lower register ohmygoshhhh!! <33333

Before the M&G session

Then after the soundcheck was M&G session woohoooo! I was in the 6th batch with AAM to meet David. There were 5 of us. When we went inside the room to meet david, the AAM batch before us were giving their gifts and giving their last words to David before they had to leave. When it was our turn, the Sony people asked us to take a group pic with David first. When I went to stand next to David, I said hi David and he said hey guys 🙂 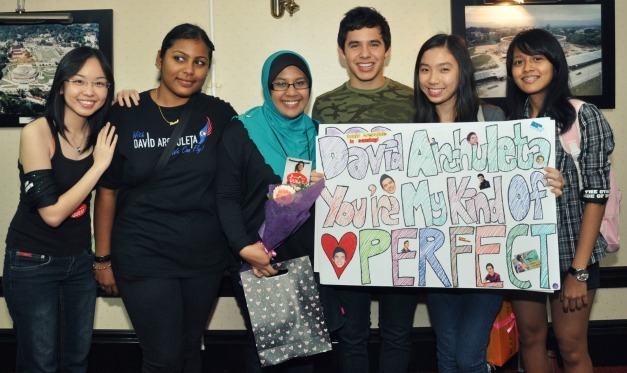 Group photo with David. From left: Natalie, James, Amelia, David, me and Sumita 😀

I could tell he was really really tired but he just smile like everything is okay <333 I was pretty bummed because the M&G session only lasted for like less than a minute because there were still many batches to go and they had to rush due to limited time. If only the M&G session was after the concert. Anyways, after the Sony people took our group pictures, everyone had to quickly give their gifts to David. Everyone wanted to talk to him so I was waiting for my turn to talk to him and the guard beside me just had to put his arm infront of me and kept saying okay okay indirectly asking me to go and david was just right infront of me pfft  -.-

After the M&G session we hang around for a little while and then headed to Times Square to have our quick dinner since we had about an hour to spare before the concert starts. We finished our dinner and quickly went to the toilet first. When we were heading towards the Monorail station, suddenly I heard Irda screamed my name “Marianne! I lost my ticket!” I turned around and saw Irda on the floor searching for the ticket in her bag and searching in every of her pockets. All of us quickly helped her to search for her ticket and Irda ran down the escalator heading to the food court to see if she left her ticket there. We were all freaking out when her ticket was no where to be found in her bag and we didnt know what to do. It was 7.40pm by then and the concert starts at 8pm! I called John and told him about it and he asked all of us to go back to the stadium and meet him at the Ticket Charge counter and maybe they can help us. Before I could call Irda, she called me and said she couldnt find it and she was crying. I told her to come back to us and go back to the stadium and the Ticket Charge people may be able to help her. When she came back and we were about to leave, we lost Cheryl -.- We were calling out her name loudly and walking around that area but we couldnt find her. I called her and her number could not be reached, great! We were just standing there clueless for about 2 minutes and suddenly we saw Cheryl running up the escalator and she said she went looking for Irda -.-

Okay so everyone was back together and we rushed to the LRT station and got our train tickets and headed back to the stadium. Irda was really upset and all of us tried to cheer her up and tell her not to worry because everything will be fine. When we reached the Ticket Charge counter, we saw John waiting for us 🙂 Then, the Ticket Charge lady tried to retrieve back all the information from the ticket launch because Irda bought her tickets through AAM. We waited for about 5 minutes and then the lady said “We are going to print a new ticket for you now, so tell her not to cry okay.” We were all relieved and so happy when we heard that but Irda was still a little upset after all she went through and I told Irda “Im sure you dont want David to see you like that right? Can you please smile for us? :D” And then she showed us her teeth and gave a smile and we cheered and clapped for her. Even the people we dont know was like woohooo although they dont know what was going on HAHAHAHAHH! 😛

After everything was settled, we were ready to get inside the stadium. When we had to get our bags checked before we entered, one of the Sony lady (I forgot whats her name) she said “hiiii!” and I said “hi, you remember me? O.o” Then she said of course because I think she seen me too many times at the ticket launch, auto session and on that day too haha. She was really nice and she asked to check my ticket and then say said “okayy, enjoy the concert!” then I said “thanks!” and guess what, she didnt even check my bag at all! Dang, I could have brought in my DSLR! lol. Anyways, when we got in, we were all feeling excited and pumped up for the concert! All of us went to take our seats and got settled.

My view from the stage 😀

While waiting for David to come out, I decided to ask James sitting next to me, “why not we all sing a song together?” Then she said “Okay! But it has to be a song that everyone knows” Then I said “Somethin bout love?” Then she said “Okay!” So we told our friends sitting near to us about it and they agreed to sing along the chorus. Then I said “Okay 1,2….3!” *Everyone start singing* “There’s somethin bout love that breaks your heart, whoa oh oh oh, that sets you free….” Then more and more people started singing along with us too. It was so fun! After that, I suggested Touch my hand and everyone sang along too. “Saw you from the distance, saw you from the stage, somethin bout the look in your eyes somethin bout your beautiful faceeeee…” Then half way singing, the band came out and everyone stopped singing because they were so excited and started cheering. We were all chanting “david, david, david!” and I could see Steven smiling haha.

Then the band started playing Stomping the roses and everyone was cheering and screaming….. and david came out!!!!!! Wooot I couldnt help but scream too heheh 😛 Ohmygosh the part David sang “carry me awayyyyy…. did you feel like STOMPINGG THE ROSESSS” ahhhhhhhh love the confidence and the energy when he walks and moves! <3333 Love dont hate was sooo good too! Sounded even better live!!! Love how David interact with his fans when he sang Elevator too. When he sang using his lower register again, wooooot so sexy! HAHAHAHAAHAH! 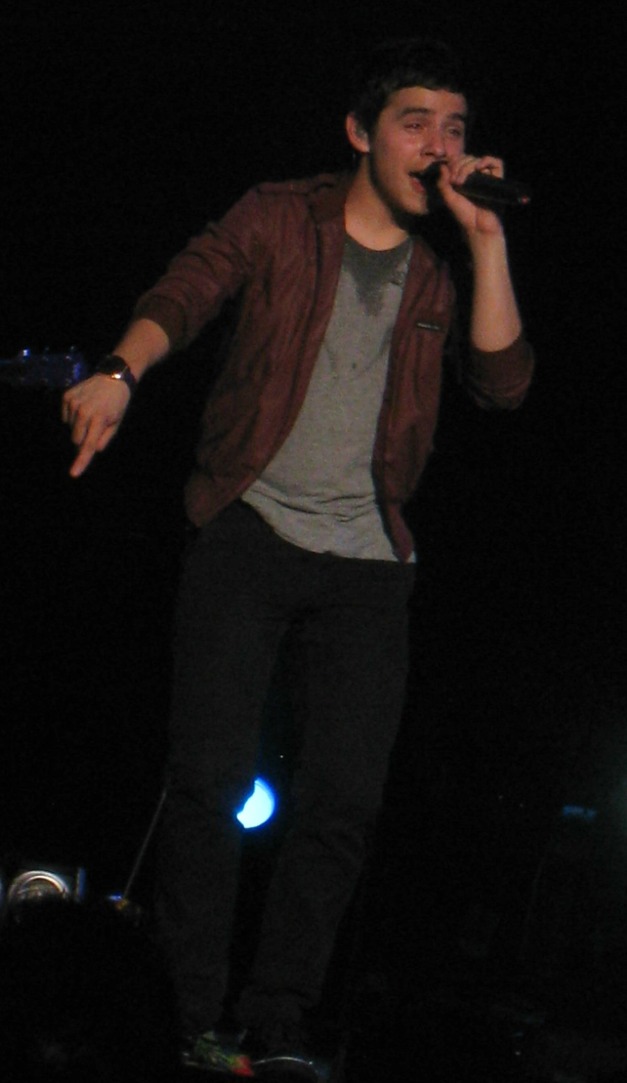 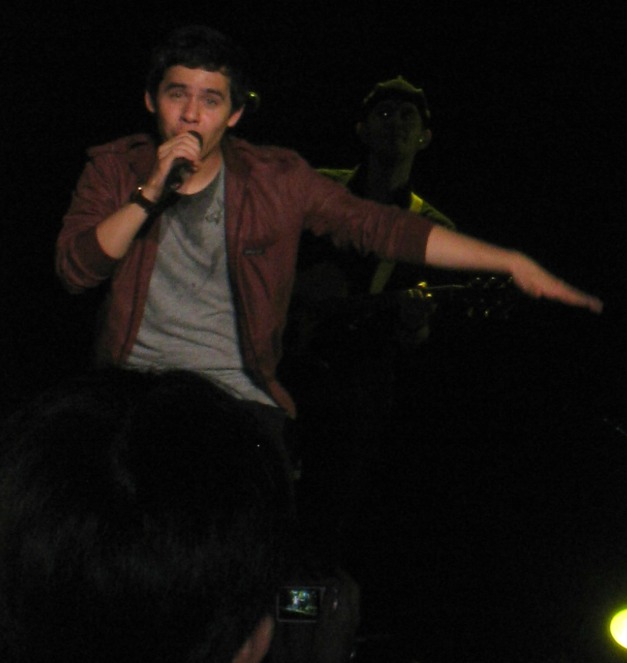 "And you just go with the flowwwww" 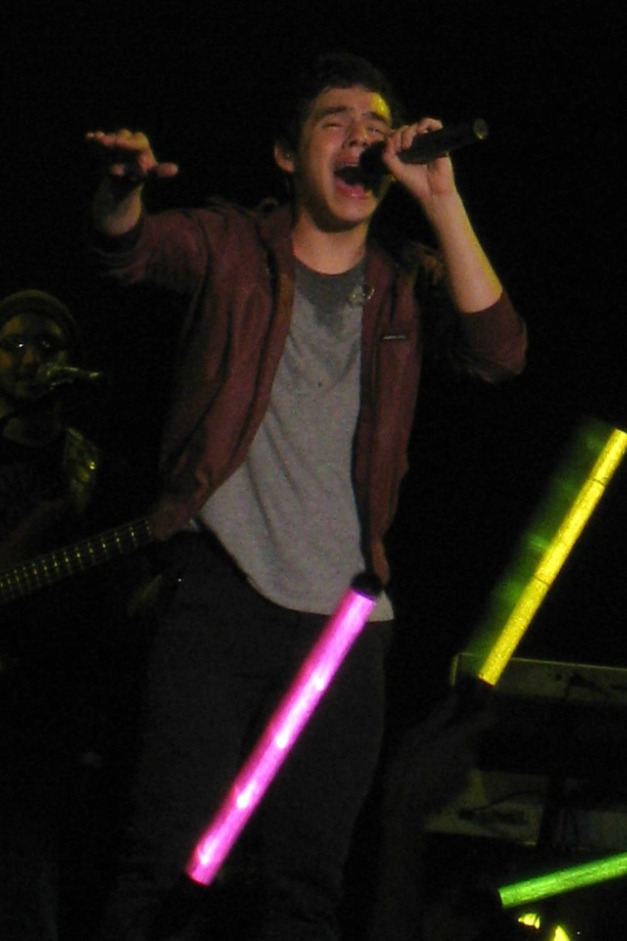 "Asking the crowd to sing"

Everybody wants to rule the world was one of my personal faves. Love how he gives great and positive messages at the beginning and he said “If you have a dream, If you have a love for something then you should go for it!” He is amazinggg! Love how he keeps to his values too <333 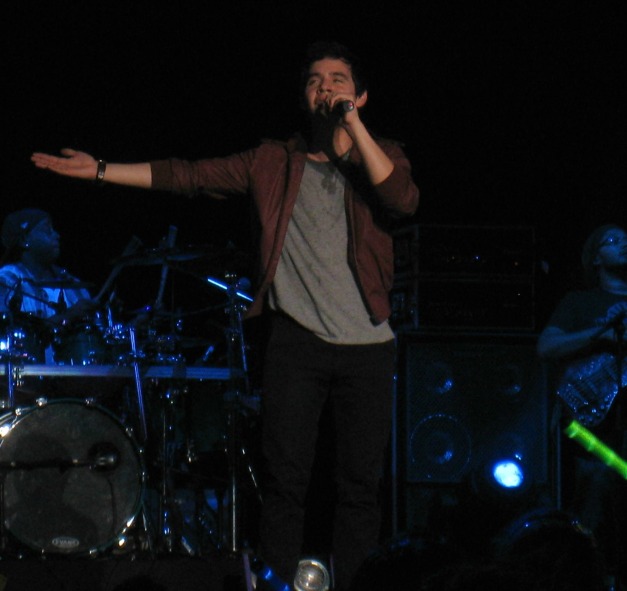 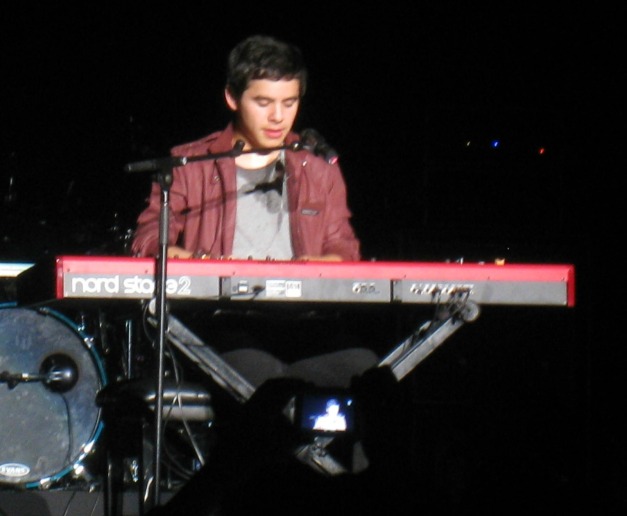 "I'll keep searching for my kind of perfect" ❤

Loved how he he said A thousand miles reminds him about his mom and he dedicated that song to her awwww :’)

Touch my hand was just awesome! My favourite song from his first album. Love it when he says “only me, only you and the band” and points to the band omggg and also when he stretch out his arms towards the fans ahhhhh ❤ So cool that he took the flower from the fan in the middle of the song too :DD

Stand by me was dsjklgdlshlg. The part when he sang “just as long, as you stand, stand by me” wooooot his hand movements and also when he sang “AND ALL YOU BEAUUUUUTIFUL GIRLS~” he really made the girls go crrraaazzzyyyy including me 😛 *hides at a corner* 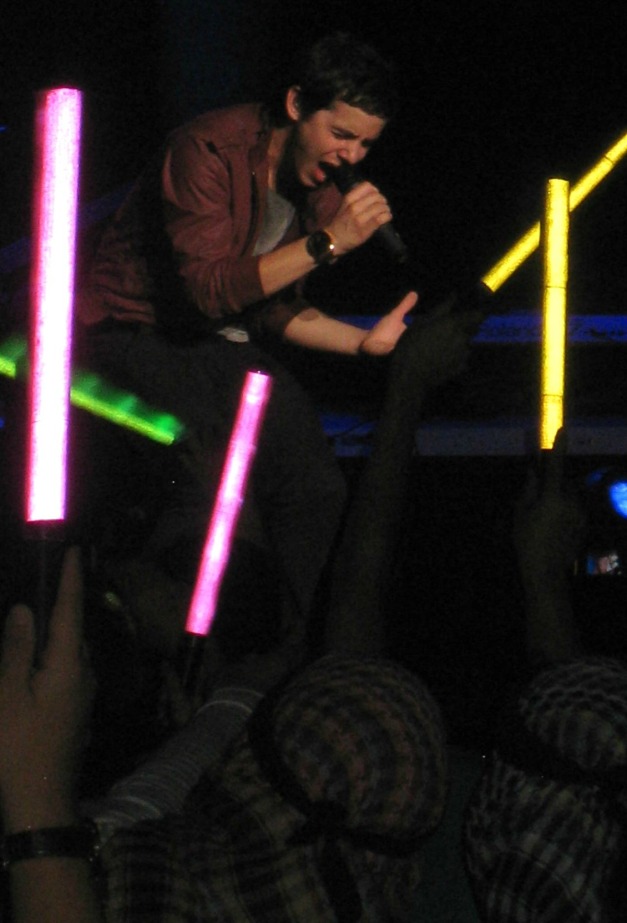 When David hit those high notes singing Everything and more, really gives me tingles everywhere.. I dont think there’s anyone who can sing it like david with such passion and full of emotions. Really really beautiful!

And then comes the encore, when David said the next song he was gonna sing is by Bryan Adams called Heaven, I screamed and I was sooooo happy until tears just went rolling down my cheek. I was really hoping for David to sing this song. When I watched him sing that song in Manila, I was like okay thats it.. David has to sing that song when he comes here. I was telling my friends that I hope he sings it during the concert and I tweeted him on the concert day itself. I said “David pleaseee sing heaven at your concert tonight!” Hearing that song really touched me and I cant believe I cried. Cried because I just just overwhelmed with emotions. I was really in heaven indeed! DAVID I LOVE YOU AND THANK YOU FOR MAKING MY DREAM COME TRUE!

I also made a banner about Heaven

Oh and before David sang crazy, so adorbs when he put his finger at his lips asking the crowd to keep quiet LOL.

The concert ended with Crush. Loved how after he sang the song, he went backstage and came back out again to thank the fans and he banged a little on the drums too!!! <333 THANK YOU DAVID!! 🙂

6 comments on “A little bit of heaven – By Marianne”