Get more Here And Here

Review from  The Manila Times

The runner-up took to the stage first. It would’ve been easy to assume he was just a warm-up act for the Idol champ who would come later, but this was a co-headlining show and from the moment Archuleta appeared onstage with his trademark, aw-shucks smile, it was evident he was prepared to put on a great show.

He’s already a pro, but he still has that wide-eyed, innocent thing going, and this is no doubt part of what endears the young talent to his legions of fans.

Now 18 years old, Archuleta has obviously picked up not a few things since he almost won the Idol title. Wearing his favored plaid button-down with a slim tie, jeans and sneakers, he worked the stage from end to end as he sang, engaging the audience with his energy and enthusiasm.

There’s that voice, too, of course. Part matinee idol, part smooth crooner, say what you will about the kid but he sure could sing. He played piano during his interpretation of Vanessa Carlton’s “A Thousand Miles,” and throughout he displayed vocal chops that would impress the most cynical of judges (cough* Cowell *cough). That charisma, that unseen factor prized by many but possessed by only a fortunate few, it’s what Archuleta has, and by the time he walked off the stage after singing his monster hit “Crush,” it all felt like the hour just wasn’t enough.

D has a snuggie, hung out with mama brooke and is going to the AI Finale whoo! Cameraman or whatever they call it, take note.We need D-in-the-audience shots!

Another shirt ninja, Sarah Liew, found these at someone’s blog! D was shopping in Pyramid before he visited Sri KDU and this girl and her friends bumped into him at a shop called Kitchen where he was shopping!And he’s soo sweet. Talking and signing autographs even while he was shopping aww. am still baffled at how he can go shopping without getting mobbed. oh! and check out the black shirt he bought yo. guy’s got good taste. can’t wait to see him wear it. and i so wanna go shopping with David Archuleta.

i know all DAVID ARCHULETA’S FANS will be crazy bout this.

I.ME.SAYA. CANDY. had the CHANCE. to meet DAVID ARCHULETA. FACE TO FACE. LESS THAN 1 METER AWAY FROM ME. TALKED TO HIM. ALL…PERSONALLY. of course.  with my college mates =)

it was like this.all i can say is… FATE.
i was supposed to attend class on 9-12. but we waited until 930. lecturer tak datang. class rep asked. LECTURER MC.
so..whole gang..went PYRAMID for breakfast =)
then…CHRISTINE…suggested to go KITCHEN (allocated beside ROXY N QUIKSILVER)
and..we was taking this dress…walking towards the FITTING ROOM. suddenly 1 familiar face came out from the fitting room. OMG DAVID ARCHULETA!!!! stunned for while. SHOUTED HIS NAME. he came forward. SIGNED HIS AUTOGRAPH FOR US. and talked with us.
(HE’S SUPPOSED TO GO SRI KDU AFTER THAT) omg lo. THANKS GOD!!!! 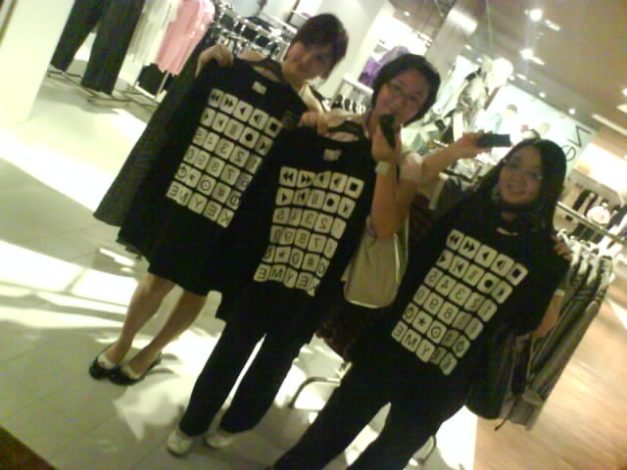 btw…i told u that he’s trying on a shirt rite. he bought it. and. WE TOOK IT AND TOOK PIC TOO LOL!!!
i feel like buying that shirt man omg….=.=

Thanks Candy! Didn’t know how to contact you, but if you’re uncomfortable about this being posted up, do inform us! 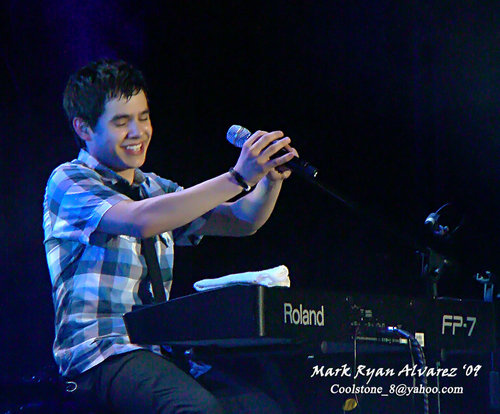 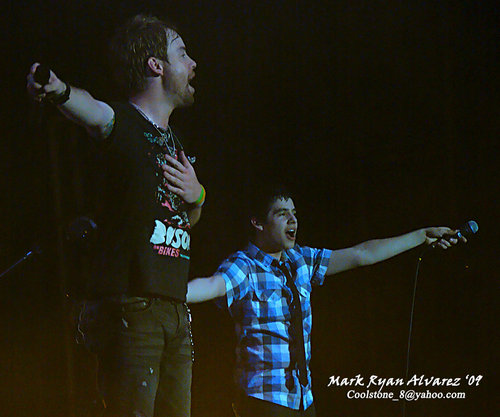 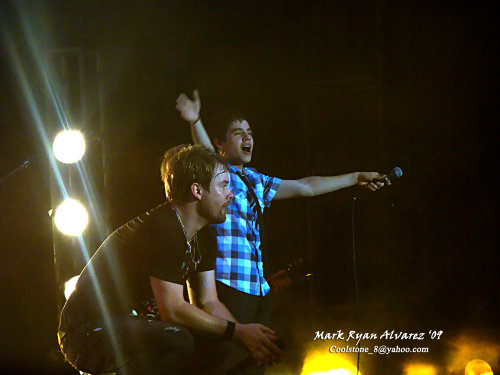 Although with fewer hit songs (two to Cook’s three), Archuleta was able to keep the audience interested by peppering his set list with four remakes: “Stand By Me” (Ben E King), “Angel” (Robbie Williams), “A Thousand Miles” (Vanessa Carlton) and a snippet of “Beautiful Girl” (Sean Kingston).

The remakes were performed successively at the latter part of the show, thus, establishing a sense of climax. Archuleta also wisely alternated between fast and slow songs instead of a stream of songs that had the same time signature and arrangement.

Archuleta was all over the stage. That’s why after doing certain fast numbers, he would reach for his bottled water and drink which, oddly enough, earned hoots of approval from the audience.

He also accompanied himself on the piano in some songs (e.g. “To Be With You”) and even whistled the instrumental hook in “Your Eyes Don’t Lie.”

The 18-year-old singer had some breathing issues in a couple of the fast numbers. Nevertheless, he was pitch-perfect in most and he was able to reach the high notes especially in “A Little Too Not Over You” and “Crush.”

Other songs that Archuleta performed were “You Can,” “Barriers,” “Don’t Let Go,” “Zero Gravity” and “Waiting For Yesterday.”

Fire up on the requests for TOUCH MY HAND on the radio stations! Check Radio & Charts tab or Archuduties below for the numbers and sms format.